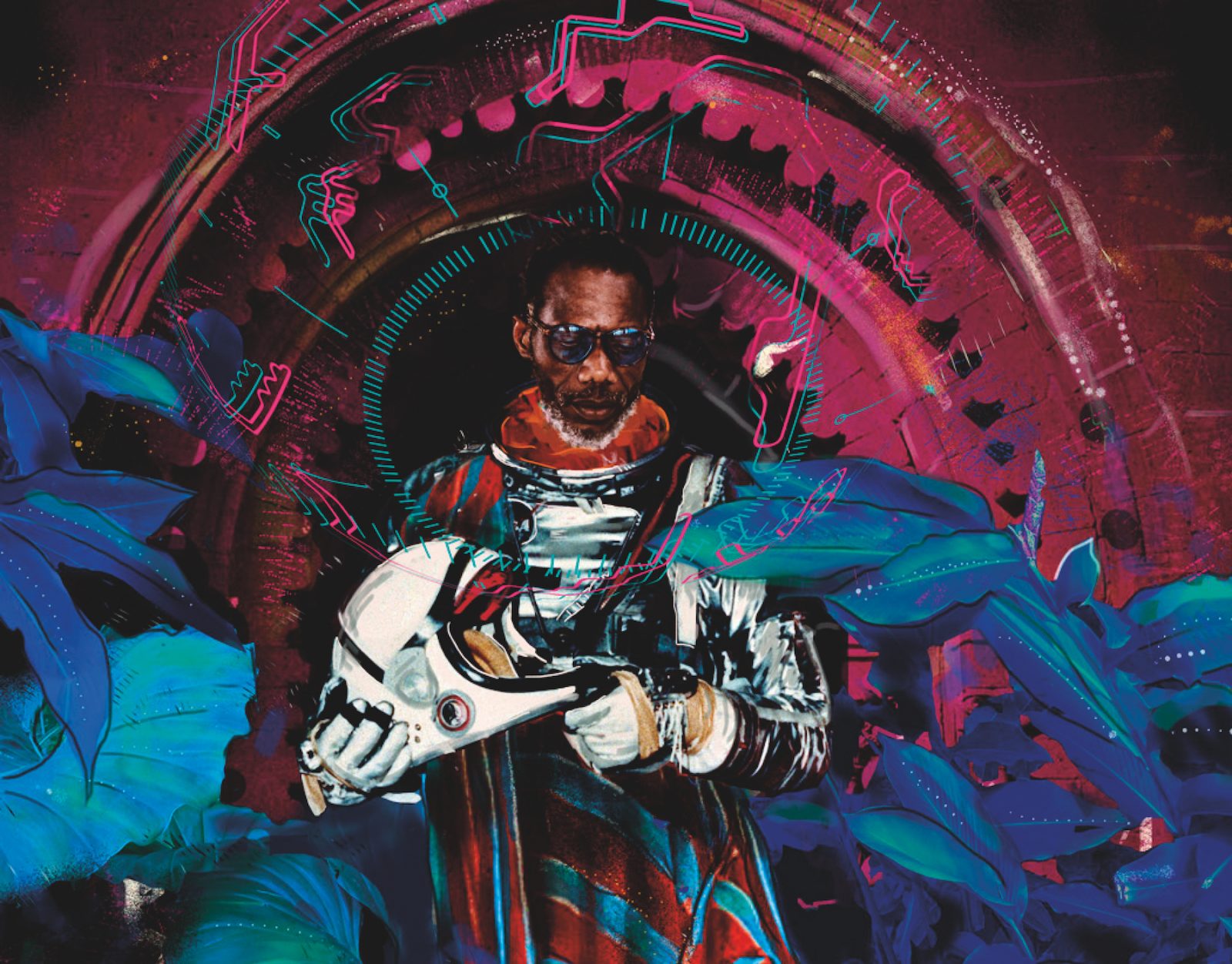 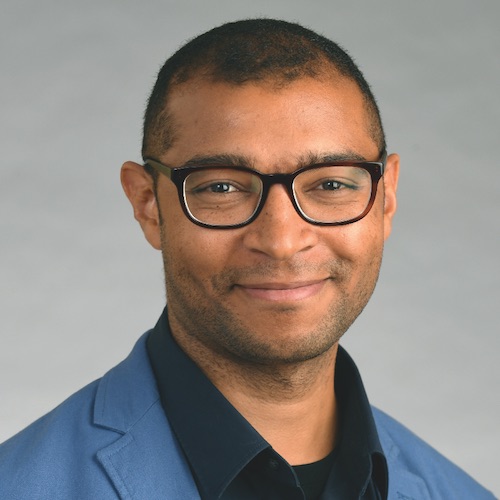 Senongo Akpem is a designer and illustrator based in New York City, and he’s also a NewMo Catalyst. We met seven years ago while I was working at a startup that wanted to help indie internet artists earn money from their audiences (that startup is gone now, but its goal was to do something similar to what Patreon does today). At the time, Senongo had just created a side project called Pixel Fable, an interactive digital archive of retold stories from his Nigerian heritage. That website is still around, and NewMo is featuring Pixel Fable imagery alongside this interview.

In his day-to-day, Senongo is design director at Constructive, a social impact design agency that works with nonprofits and foundations. He recently published a book called Cross-Cultural Design.

LYDIA LAURENSON: Hey Senongo, tell us about your new book!

SENONGO AKPEM: It’s my first book! It was published by A Book Apart, which is an amazing team.

LYDIA: Is A Book Apart related to A List Apart? As I recall, A List Apart is a trade publication for designers, which began as an email newsletter in 1997. One of the co-creators was Jeffrey Zeldman, the current creative director at Automattic (the company that makes Wordpress). Zeldman’s work is always interesting — he’s a stalwart of the early Internet, had a mailing list before it was cool, and is very supportive of independent digital creatives. Does A Book Apart show that DNA?

SENONGO: There’s a relationship there, but they are separate entities. Of course, a lot of the people who write for one will write for the other. But yeah, Zeldman essentially created the Web Standards Movement — cross-browser standards and rules for people who make websites. The books that A Book Apart publishes still follow that mission. With the pace at which technology moves, the topics we're talking about today in design are definitely not the things that he focused on in the past, and that's a good thing.

My book asks what it means for interaction designers as the web expands into more cultures and countries than ever before. There’s infinite variability in human civilization, and it’s fun to explore how design must adapt when you put it all online.

“Certain interaction patterns got set on the web early on... in Arabic-language sites, for example, you'll still see video interfaces use a left to right play icon, even though Arabic is a right to left reading experience.”

Of course, certain interaction patterns got set on the web early on. For example, a pattern we're all familiar with is the search box being in the top right of a page. Another one would be the play icons that we see on video interfaces like Youtube. It's very difficult to break away from those mental models, even in cultures where it might not have naturally started that way. So in Arabic-language sites, for example, you'll still see video interfaces use a left to right play icon, even though Arabic is a right to left reading experience.

This cultural difference can translate into a lot of impact. Web designers from direct communication cultures probably don’t even know they naturally make websites that are more easily indexed by the biggest search engine on the internet. They're just building a website the way that makes sense for them.

SENONGO: When I was young, my dad, who's Nigerian through and through, told me a story. He had gone to seminary in the US, and when he started at school, he would often get negative marks from teachers, in their rankings of how he interacted with them and with other students. He didn’t understand it until he had a professor who was a white missionary, who had also lived in Nigeria. The teacher observed that at the time in my father’s Tiv culture [an ethno-linguistic group in Nigeria and Cameroon of about 6.5 million people], it was disrespectful to look people in the eye. Usually, when conversation happens among Tiv, they aren’t necessarily looking at each other at all. They're staring in different directions, they could even be sitting back to back, but it can still be a very personable conversation. My dad was performing that same thing with people in class in the US, and that was perceived to be standoffish, like he wasn't interested.

Of course, that’s not to do with the internet at all, but cultural norms get magnified when technology gets involved. This is something that I talk about quite explicitly in Cross-Cultural Design, the influence of cultural dimensions on the ways that we design. My main question was: What does this mean for a web designer?

Every time we ask a question about how content is structured in one part of the world, we necessarily miss how it's structured in another part. And the internet is currently outpacing our ability to gain the whole picture.

LYDIA: Tell us about Pixel Fable, which is an incredible cross-cultural digital art project.

SENONGO: The first story I did was “Why The Sky Is Far Away,” eight years ago. The rational Westerner in me, which is 50% of my DNA, says, "Well, obviously the sky isn't actually a thing at all." But the Tiv in me knows the story from my childhood, which is the sky used to be very close — touchable, in fact, by humans on the earth. There was a particularly beautiful woman, and the sky became infatuated with her and kept getting closer and closer so he could watch her during the day. One day she was pounding some food in her village, and she accidentally hit the sky in the nose and he was shocked. He decided to pull back a little bit, and he kept going farther and farther back up, up, up, and became what we know as the sky today. That’s why we can’t touch the sky.

The most recent Pixel Fable story I released was called “The Voyage of Captain DaCosta.” It’s a bit different, because it’s not based on a Nigerian story. I lived in Japan for a little over seven years, and learned about these Japanese paintings from the 1600s called “Nanban” (南蛮), which roughly translates to “the Southern barbarians.”

It was the same century Westerners started to arrive on the shores of Southern Japan, also called the Age of Expansion. So these paintings show massive Western ships, and half the sailors were people of color. Most, maybe all, of those POC sailors were slaves or indentured servants, though there were Indians picked up in Goa who acted as navigators and so on.

Throughout the Nanban pictures you don't get the same sense of the race dynamic that you would have if it was painted by a Westerner at that same point in history. So I did this story that walks through the diary of Captain DaCosta, a Black African-Portuguese sailor who managed to take control of a ship on its way to Japan, and ended up settling  there, in Nagasaki. I wanted to ask: What would it have looked like if one of those Black sailors was the leader of an expedition?

LYDIA: Was DaCosta a real person?

SENONGO: Was he? I very deliberately structured the story to make people ask that question.

LYDIA: So what’s your next fable?

SENONGO: It’s called “Shan Geh: Messages From the Orchid Terraformers,” and is a series of illustrations of Africanesque scientists, all people of color, working on a terraforming project on a distant planet. In order to get inspiration for the stories, I hired a Nigerian developer to do a text mashup. Using a Markov Chain text generator, we auto-generated text using old expedition diaries from Russia and North Africa, and botanical descriptions of orchids, and sci-fi vocabulary. This text gives weird descriptions, such as “These usually consist of only two or three excessively thin branches, which could be traced close up to the very stars.” 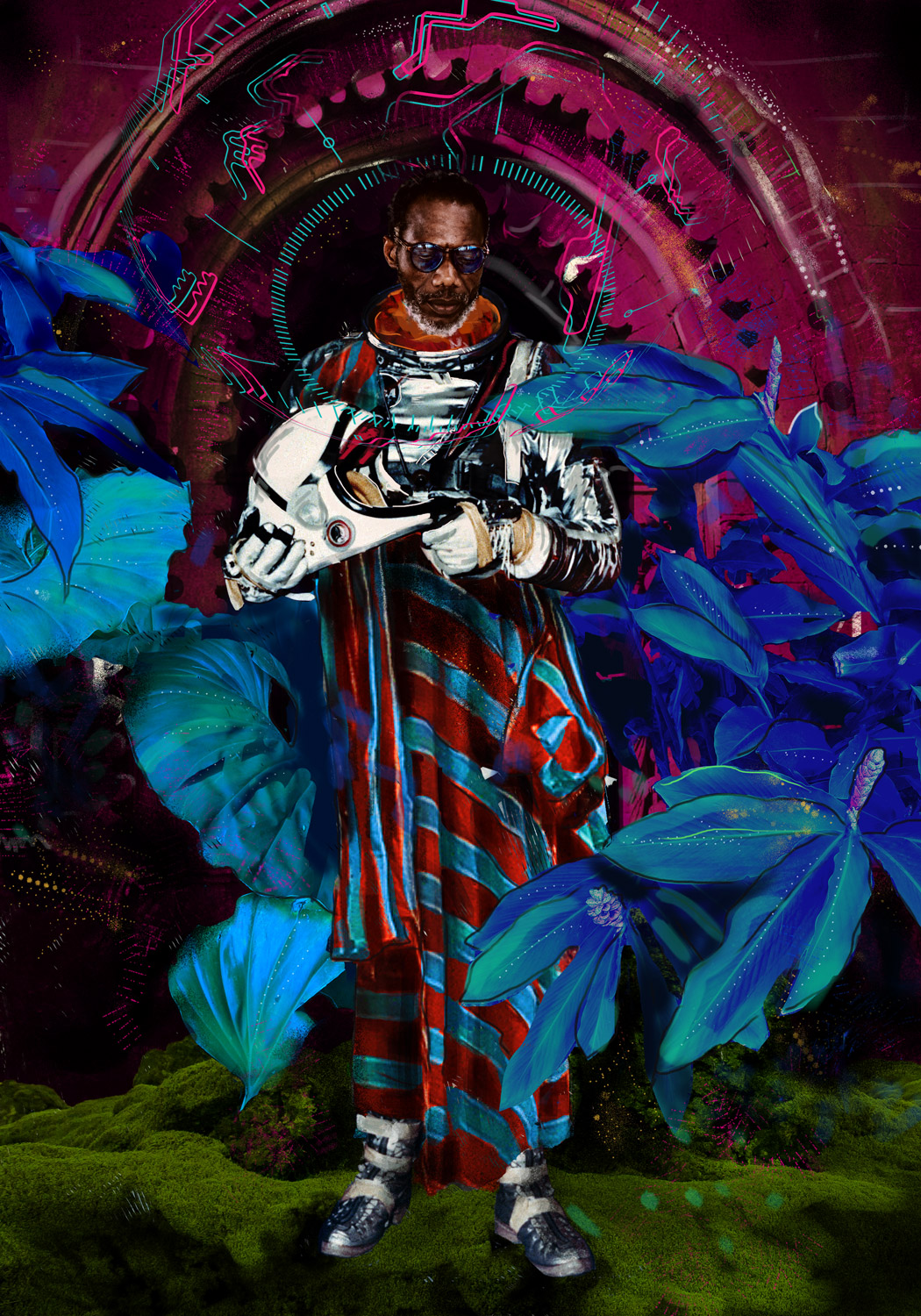 What does it look like if our future is actually free? is a question I'd really like to explore. Also, I’ll give a shoutout to my big sister Denenge Akpem, who’s been writing and performing Afrofuturist work and teaches at the School of the Art Institute in Chicago. She just authored a book,  AFRIFUTURI 02022020, released on February 2nd, 2020 (02022020), a series of essays about Afrofuturism. She had a fashion show that went along with it, the Camo Coat Collection.

LYDIA: You are mainly producing work that you post on the open Internet — have you found a way to support your content monetarily?

SENONGO: I haven’t dedicated as much time to that as I should. But the greatest example of monetization I ever heard about was by an artist who was born with four kidneys. Most people have two, she had four. And instead of allowing her DNA be patented by some big pharma company or whatever, she sold the rights to her own DNA to someone else, for the price of a set of chocolate rosary beads, so that it could never be taken away from the public domain. The museum exhibited the chocolate beads alongside photographs.

It was a long time ago, and I may be misremembering details, and I don’t recall her name, but I distinctly remember that she had four kidneys, and she sold the rights to that DNA for nothing, on purpose, to make a statement. [Editor’s Note: Following this conversation, both Senongo and I tried to find a record of this artist and were unable to do so. He adds: “It was right before large-scale cataloguing of social activity online, so no idea how to find a link to the artist!”]

I always think of that example. You don’t need to charge for your art, and if you do, it can just be a token amount, especially if you want to make a point. That having been said, I do hope at some point to earn money from Pixel Fable.

This interview was conducted and edited by Lydia Laurenson, editor in chief of The New Modality. It was lightly fact-checked by our editorial team. Learn more about our process and our transparency policy at our page about truth and transparency.