Screenshot from the 1984 Hayao Miyazaki anime film "Nausicaä of the Valley of the Wind," used by @ctrlcreep as their header image on Twitter

@ctrlcreep is the Borges of Twitter. Or they will be, when the Internet is old enough to be art, and all the obscure-at-the-time masters have been discovered and redeemed by AI curators. There are stranger Twitter accounts, but nothing quite as surreally self-aware. In the “Bio” field, @ctrlcreep has written “analog, but not for long;” in the “Name” field, “neality.” Their work is technophilic, geeky, often dark, yet also joyously fantastic. There are aliens and AI in @ctrlcreep’s tiny vignettes, but also cherished pets and family moments.

@ctrlcreep usually throws out several tweets per day. Not everything is a gem, but many are. 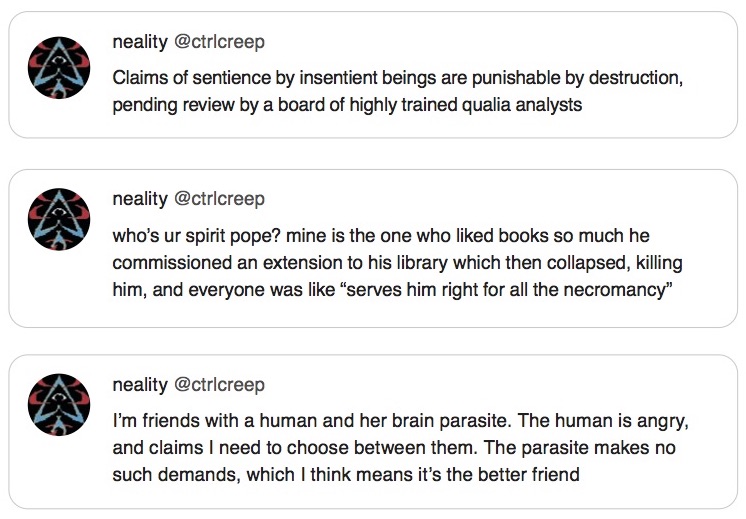 In early 2020, @ctrlcreep declared a shared writing exercise to take place over social media: #invisiblenetworks. Every day of February, @ctrlcreep announced a new prompt on the website invisible.social. For each prompt, the audience was instructed to “Invent a weird social network and write a short story. (Bonus: guess which prompts are human, and which were generated by AI.)”

We asked @ctrlcreep about their favorite responses to #invisiblenetworks. Here’s one of several favorites they sent over, which was written in response to “Architectural Interface:”

You live in spaces shared across space. Instantly accessible, fully separated. Doors connecting many-to-many rooms. Highways overlapping, instantly there from anywhere. The store never runs out of stock; it's every store at once. Your friends always the next house over, or the one after that. The party never too loud, and your enemies never there.

You use your favorite pen to write on the same sheet of paper as your coworkers. It branches its existence at the lightest touch, merging back as soon as it can. Stacks of edits fighting for approval disappear into a single copy with a satisfying pop.

You isolate yourself to gaze at the night sky, no light but the stars' in sight.

The author of the above “Architectural Interface” story participated in #invisiblenetworks via their Twitter handle @mdfang. When we asked their name, they requested to be identified as ~palfun-foslup, which is their pseudonym on urbit.org. (Urbit is a highly technical effort to rebuild the internet from scratch. Its website describes it as “a clean-slate OS and network for the 21st century.” The “Architectural Interface” response was originally published on Urbit before getting re-posted to Twitter, and its author notes that “the ultimate vision for Urbit inspired the story. I'm a software developer for the company building it, and generally excited about this kind of user-centric, localism-first software.”)

@ctrlcreep also responded to their own #invisiblenetworks prompts. Here’s what they wrote for the prompt “Luxury Notifications:”

At 10 retweets, it feels like a butterfly landing in your ear.

At 100 retweets, you hear the song of an extinct bird.

At 1,000 retweets, you drop into an ermine tube of warmth.

One of us has been following @ctrlcreep since the account mysteriously started tweeting, in 2014. Foolishly, she didn’t screenshot her favorite early tweets. Those tweets are now lost to us because @ctrlcreep has deleted their archive, as many Twitter users do. Let this be a lesson to you — if you choose to pursue the elusive @ctrlcreep, be sure to record your favorite moments.

We leave you with this recent Twitter exchange, which we observed between @ctrlcreep and one of their followers: 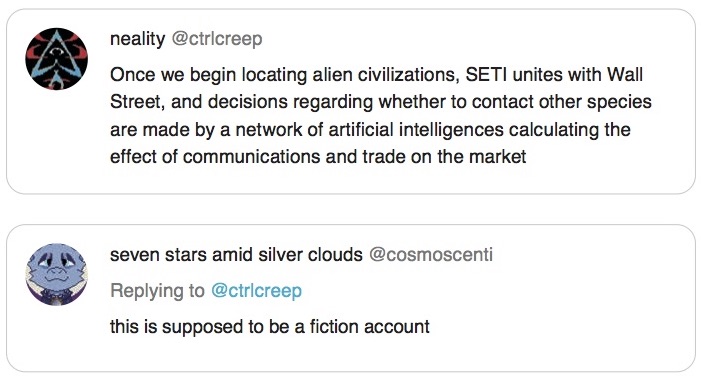