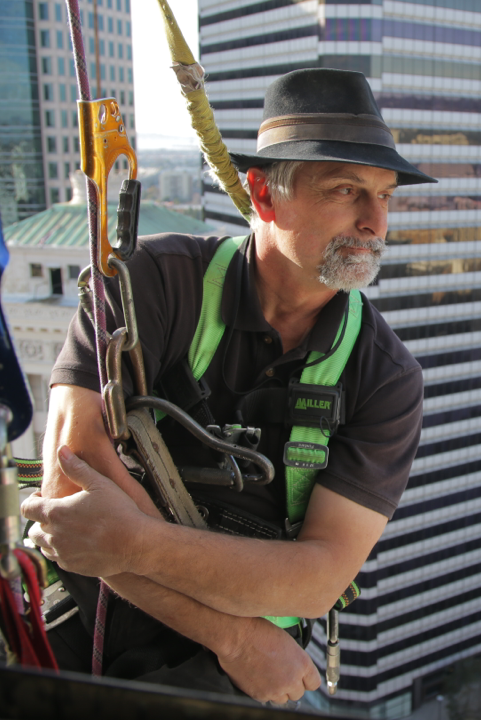 He's also a NewMo Catalyst and he's been a huge supporter of The New Modality, even though we don't always agree about everything ;) Another NewMo community member suggested that we give John the title "Minister of Not Selling Out," because he absolutely would not let us sell out without a fight.

Hey John. How would you ideally present your bio?

I would say: "John Law has been involved in creating underground culture in the San Francisco Bay Area and beyond for 40 years. Law was an original member of the legendary San Francisco urban adventure and pranks group The Suicide Club, attending the first initiation in February 1977. Law was integral to the creation of The Cacophony Society in 1986. He has worked with a number of California, Michigan, and New York-based arts and pranks groups including Laughing Squid (co-owner) , Survival Research Labs, The Madagascar Institute, Dark Passage, San Francisco Cyclecide Bike Rodeo, SEEMEN, Seafoam Palace, and many more.

"Law has owned and operated a neon sign company, Central Services, since 1992. He maintains many iconic Bay Area signs including the landmark Hills Bros Coffee sign and the Port of San Francisco sign atop the historic Ferry Building, and he keeps the business office in the iconic 1920s Oakland Tribune Tower.

"Law is still involved in the worldwide urban exploration underground, and collaborates with a number of artists and businesses on various projects. He lives in San Francisco with frequent trips to Oakland and Truckee, and less frequently to Portland, New York City and Detroit MI."

Two of my favorite collaborations in recent years are not well-documented. They were “DADA-esque,” in that the intention was to collaboratively create the experience for the organizers and participants, and to be entirely in the moment, with little or no mind to posterity. My best-known work has been collaborative in nature and often recorded. But of these two endeavors, almost nothing exists except memories, making them quite special.

The first was a series of three nighttime events I co-produced with the talented multi-instrumentalist, performer, composer, and teacher Mark Growden. We called it COVERT. Before coming, all attendees agreed to bring absolutely no electronic devices. The events took place in parks at night, abandoned tunnels, and waterways. The only existing images of the COVERT events are some charcoal sketches made by the artist Mona Caron.

The second event, which took place in 2016, was commissioned by Peter Maravelis at City Lights Bookstore, for the one hundredth anniversary of DADA. This was a collaboration between me and Joshu A DeLeon of SRV/A. It was done in the spirit of The Cacophony Society and Cacophony’s main influence: DADA.

What’s a specific project that you’re excited about *right now*? (It can be yours, or someone else’s.)

I remain embedded in the worldwide practice of urban exploration, or UrbEx, as the kids call it.

“Pioneering capitalists have tried to make businesses out of urban exploring for some years now, but the lawyers and the legal concept of financial liability and the limitations of indemnification from illegal actions make it impossible to make a business out of exploring places illegally. That fact is spectacular, and very cheery for me.”

Although I had explored sewer tunnels as young as 10 years old and always enjoyed that sort of thing, I was introduced to the concept as a thoughtful, formalized endeavor by Gary Warne when I joined the Suicide Club in 1977.

Urban exploration is thoroughly underground (literally as well as figuratively) and always will be. It cannot be commodified because by nature it is transgressive. Pioneering capitalists have tried to make businesses out of urban exploring for some years now, but the lawyers and the legal concept of financial liability and the limitations of indemnification from illegal actions make it impossible to make a business out of exploring places illegally. That fact is spectacular, and very cheery for me.

There are some disciplines and specific philosophies from the Great East that resonate positively in our society and are a welcome addition. With that said, I’m thoroughly Western when it comes to my philosophical view of this world and humanity’s place in it.

So I would have to say that my ultimate hope for the future is that we run into life from other planets and that we have to strive together as one unified people and species to avoid being destroyed by these alien forces and/or to join them in whatever interstellar fellowship might exist. Humanity's lot is to struggle. Everything I love comes out of that struggle.

Here are two of my favorite quotes:

"IT SEEMED TO BE AN ESTABLISHED FACT that the inventive faculties, even of men of inferior mental quality, are sharpened when they engage in mischief."

"It was better, he thought, to fail in attempting exquisite things than to succeed in the department of the utterly contemptible."

I’m pleased that you are creating this online salon as a mechanism for an in-depth exchange of ideas. It’s more important than ever for artists, writers, and thinkers to be transparent and honest in their presentation of ideas and to avoid the Animal Farm pitfalls of groupthink that seem to be infecting much of our shared dialogue these days.